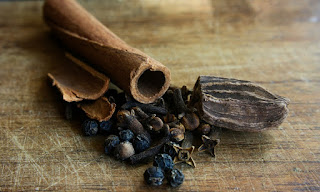 India’s garam masala (‘hot spice’) is popular during the cold months. It is a combination of spices that have been lightly roasted and powdered together. Stirred into curries and soups, sprinkled onto rice, and sometimes added to pies, it has been said to dispel the winter woes.  Here are the ingredients:


Cloves: In winter, they can help improve blood circulation and digestive system.


Cardamom:  Folklore has it that this warming spice can balance the body’s Ayruvedic energies (Vata, Pitta and Kapha) that circulate in the body.


Black Pepper: Once a sought-after spice, it boosts appetite and helps to ward off viruses.


Cinnamon: Herb lore reports that it brings relief from arthritis, sharpens the brain and fights bacteria.


How Much Do You Know About Black Pepper?

According to some legends if you sprinkle pepper onto some soil in a flower pot, a small plant will magically spring life. It will be ready to grant you three wishes.


The Philadelphia Pepper Pot Soup was made during the Revolutionary War to take advantage of the lack of food supplies the Continental Army had to work with. Peppercorns, along with meat scraps were said to ‘fire’ the army up so that, at last, they won the war.

Posted by folkheart press at 1:38 PM