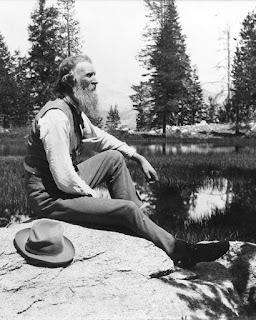 One of America’s most noted naturalists was born in April 1838. A native of Scotland, John Muir went on to become an influential advocate for preservation of this country’s open spaces.

Raised on a Wisconsin farm when his parents immigrated to the United States, Muir was familiar with the Midwest which was then considered the wild west.

He went to seek his fortune as a mechanic and inventor during the industrial explosion that was sweeping the country. Unfortunately, he had an accident that left him temporarily blinded and changed the course of his life.

He decided to take a 1,000-mile walking tour of the American West. Locations included the Sierra Nevada. Admittedly encouraged by transcendental thinkers like Ralph Waldo Emerson and Henry David Thoreau, he believed that that wild nature offered a “window opening into heaven, a mirror reflecting the Creator.”

Muir was committed to keeping the Sierra Nevada undeveloped and, by 1892, he and other early preservationists formed the Sierra Club. Their goal was to maintain the importance of wilderness preservation so that others could be replenished by its splendor on both spiritual and physical levels.

During his lifetime Muir published over 300 articles and 12 books. His credits include being known as the “Father of the National Parks.” He was also a geologist botanist, and writer.

He often called the Sierra Nevada his home, even after his 1880 marriage at the age of 40 to Louisa Strentzel, daughter of a prominent physician and horticulturist in Martinez, California. He died in 1914 and was the first person honored with a California commemorative day - John Muir Day - which was signed into law in 1988.


Posted by folkheart press at 11:22 AM No comments: