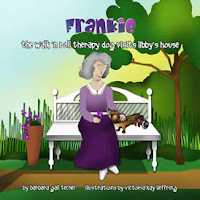 Animals abound in the treasure trove of folktale subjects. Coyote, Cerbes, and Brer Rabbit are only just a few that come right to mind.
In Tucker's Tale author Barbara Techel introduces us to an extraordinary feline who has a bit of the trickster about him.
Barbara's well-told tale leaves very thin lines between fact and fiction:

As I begin writing this month’s article, my cat Dani sits perched on the ledge of my office window. She is fascinated by the jumbo fluffy snowflakes descending ever so lightly from the sky. Her internal motor chugs along with a steady beat as she watches life go by from the inside, out.

Many cats have come and gone in my life. Each one of them had a distinct personality. While dogs will do all they can to please you, a cat tends to make the rules and you must abide by them. I have not yet figured out how they have trained me to do that, but I go with the flow so I don’t ruffle any fur.

Before Dani, I had a cat that started life with me with an amusing tale. This kitty was the little girl I had been longing for. I named her Ms. Elle. Three days after getting her, my husband John and I were lazily laying in bed on a Saturday morning. Ms. Elle was lying on her back, stretching and relishing in the warmth of her new home. As I glanced down, I thought I saw something that should not be there. I looked to John and I asked him, “Are “those” what I think “they” are?” Sure enough, Ms. Elle was really a boy. I shrieked, “Oh no! I wanted a little girl!” John always seems to have a clever answer and this time proved to be no different as he said, “You will now have to call her Mr. Ed.” The next day “Mr. Ed” had a scheduled appointment at the vet for a checkup. Still not believing she could be a he, I asked the vet for confirmation. The vet lifted the kitty in the air and stated most clearly, “Yes, those are testicles.” I had wanted a female so bad that I said, “Are you sure?” The look the vet gave me made me realize I was not dealing with reality. As I headed back home I grieved the loss of Ms. Elle.

The next task at hand was to come up with a new name. This cat would be permanently scarred if I continued to call him by a dainty name. A few days later, waking up to this spunky pistol of a fur ball, standing bow-legged in front of me, the name Tucker popped into my head.

Tucker grew into a strikingly handsome chap with his shiny coat of striped black and tan. He went with the flow of life while living with a gentle Chocolate Labrador and a boisterous Dachshund. Tucker spent most mornings peering out the patio door watching the birds hop along the top of the deck railing. His ears would lay flat against his head as he chattered away as if telling those birds to move along for the day. After a few hours he would saunter to a cozy sun spot, curl up and sleep the rest of the afternoon away. Ah yes, the rough life of a cat.

While vacationing on the tropical island of Key West a few years ago, John and I pondered the question: “What does Tucker do while we are away?” As we sipped our Mai Tai’s, basking in the warmth of the Florida sun, we began creating a story.

We imagined Tucker was absolutely thrilled to have the whole house to himself. He would not have to contend with the dogs because they were staying at a nearby kennel. Because Tucker was so laid back, we knew he probably had a wild side to him, which only came out while we were away. We envisioned Tucker calling up his alley cat buddies the moment our tires rolled out of the driveway. He called to let them know the folks just left and it is time to party!

One by one, cats would slink to the back patio door of the little yellow house. Three taps of their paw and a meow would allow them entrance in. Once inside it was dark and smoky. Small round tables were set up everywhere with Tom cats sitting on chairs, smoking cigars and playing poker. Young scantily dressed female cats were making the rounds with trays of drinks. Screeches of meows could be heard when a poker round was won. Tucker was known in the neighborhood as the King of poker! Our imaginations were probably a bit tainted from the Mai Tai’s, but none the less, we enjoyed weaving a tale of Tucker’s darker side.

As we arrived home after our relaxing time away and opened the front door we walked in to find our serene cat curled up sleeping in his favorite spot. As I began unpacking, I laughed to myself about the absurdity of Tucker playing poker and chuffing on a cigar. I then made my way into the living room, and noticed there on the floor, peeking out from under the sofa, something most peculiar. Was that an Ace of spades and a poker chip?

Barbara is the author of the multi-award winning book, Frankie, the Walk ‘N Roll Dog. When her dachshund, Frankie, suffered a spinal injury, Barbara had her custom-fitted for a wheelchair. Frankie persevered, and Barbara realized the beautiful opportunity she had to share Frankie and give others hope and inspiration to be the best they can be. Along with sharing Frankie’s story with children, Barbara and Frankie routinely volunteer as a therapy dog team at local hospitals, nursing homes, and hospice centers, spreading joy wherever they go.
Barbara hopes her second book in the Frankie series, Frankie, the Walk ’N Roll Therapy Dog Visits Libby’s House will teach that no matter what life challenges we face, we can still give back to the world. She also hopes it will encourage children to spend quality time with their grandparents and cherish each and every moment.
Since 2005, Barbara has been a contributing writer for the Depot Dispatch sharing stories of her animals, as well as other furry friends she has met along the way. Just recently Barbara's story, "The Blessing of a Wheelchair-Bound Dachshund", won an award in a contest sponsored by bestselling authors, Linda and Allen Anderson of Angel Animals Network. Frankie's story, "Frankie Keeps on Rolling" will also be featured in "Every Dog has A Gift" published by Tarcher Publishing, to be released March 2010. She is also active in helping to bring positive awareness to special needs animals through National Disabled Pets Day. Frankie herself is Wisconsin Pet Hall of Fame Companion Dog & Official Mascot for National Disabled Pets Day. Barbara is a member of Wisconsin Children’s Book Writers & Illustrators, Dog Writer’s Association of America and Wisconsin Regional Writer’s Association.
She is also editor for the Elkhart Lake Friends of the Library newsletter.

Thank you Barbara for sharing this folktale with us!
Posted by folkheart press at 6:08 PM 5 comments:

The Folklore of Romance

February is considered the month of romance – at least that is the case in Western Europe and the United States. Long considered a monthless period (remember that the month itself did not exist in the original 10 month Roman calendar), it has come to represent the early onset of Spring. Spring, of course, is a season of “rebirth”. Fruit trees begin to blossom and many members of the animal kingdom produce their offspring. Human beings, too, emerge from the darkness and depth of winter silence into the light of this fertile time of year.

No wonder this month is connected with romance, courtship, marriage and intimacy.

Here is some folklore about some of the season’s symbols:

Cupid: This Roman God of Love who was always seen with his bow and arrows was the son of Venus he represented passion and playful love. According to some, his image changed significantly during the Victorian era to that of an asexual child.

English Lavendar: English lore has it that lavender can attract men. It was said that young ladies would wear small lavender bags in their cleavage to lure suitors. However, it was also used for chastity.
On St Luke's day young maidens would sip on a lavender tea and say.
"St Luke, St Luke, be kind to me,
In my dreams, let me my true love see.”
Girls would tuck some lavender under their lover's pillow so their thoughts would turn to romance. Lavendar placed under the marriage mattress would ensure marital passion.

Red, White and Pink: Red, often associated with warmth and feeling, is linked to the color of the human heart which distributes blood (red) throughout the body. February derives its name from the Latin term februum, which means purification, and is represented by the color white. When mixed together, red and white produce pink. A soft color that blends feeling/passion with purity it denotes the innocence of true love.

In celebration of True Love Folkheart Press is sponsoring a TRUE LOVE essay writing contest this month. Entries have already been selected and the voting has begun.

If you want to help us select the winning essay by casting your vote visit our contest blog.

It might inspire you to write a TRUE LOVE essay of your own!

Happy Valentine’s Day!
Posted by folkheart press at 7:50 AM 8 comments: