Gnome, how does your garden grow? 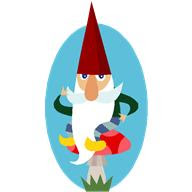 Wee people are a great source of folklore. These small human-like personalities have been credited with being both good and bad. They can create problems by removing or rearranging items in the house or the yard. They are also able to perform small acts of magic, like helping a garden grow.

Garden gnomes, in particular have grown in popularity. Customarily, they decorate front yard landscapes of all kinds (grass, red rock, etc.). Often wearing pointed hats and beards, they have been credited with being protectors. It is believed that they do their garden work at night when everyone else has gone to bed.

The ceramic version was developed in Germany in the 1800's and soon spread to France and England.

The first garden gnomes were made in Gräfenroda,[1] a town known for its ceramics in Thuringia, Germany, in the mid-19th century. Philip Griebel made terracotta animals as decorations, and produced gnomes based on local myths as a way for people to enjoy the stories of the gnomes' willingness to help in the garden at night. The garden gnome quickly spread across Germany and into France and England, and wherever gardening was a serious hobby.

The manufacturing of gnomes spread across Germany with numerous other large and small manufacturers coming in and out of the business, each one having its own particular style of design. World War II was hard on the industry and most producers gave up then. Griebel's descendants still make them and are the last of the German producers, all others having moved production to Poland or China. Currently, there are an estimated 25 million garden gnomes in Germany.

When I think of gnomes I think of the Travelocity character who is "seen" in many places around the world. Hardly the gnome who stays home to tend to the garden!

I've also noticed that gnomes are generally never alone. They've got company - either other gnomes or small animals like deer - that serve as their landscape companions. I once saw an entire 'gnome village' with mayor, etc. in a mobile home park for senior citizens.

In some ways they are akin to the urban scarecrow, only they don't have any moving parts. Just the same they seem to be well-loved by those who own them.

The magic of folklore is that it makes the everyday 'special'. Stories, songs, food lore and folk art are among the many ways people choose to preserve what is important; what is worth remembering and sharing with others.

So what's so important about a one-woman show that highlights a vacation Shirley Valentine takes to Greece? Well, in this case the protagonist is a typical British middle-aged, working class housewife who takes the vacation of a lifetime WITHOUT bringing her life along.

What happens to her is at the heart of this theatrical presentation. Scheduled to run May 27-June 12 at the Cinnabar Theater in Petaluma (North San Francisco Bay Area) this show tells Shirley as much about herself as it tells the audience. Together they find out who Shirley really is.

Sebastopol's Mary Gannon Graham who performs the role of Shirley Valentine recently took some time to answer questions about the piece which was written by Willy Russell.

Q: Shirley Valentine is ‘every woman’; a middle aged working class housewife who finds herself in Greece. Her life becomes an adventure. The journey provides opportunities for her to discover something very important about herself and the world she lives in. What drives her to embark upon this journey?

A: Ever since she was a girl she wanted to travel, she dreamed of being an Air Hostess or a Courier, but she's married to a man who doesn't like to travel so when her friend Jane gives her the opportunity of getting away for a fortnight, it's almost too good to be true.

Q: What does she learn? And how does (or does it) change her in any way? Could she has experienced this while staying home (in England)?

A: She learns to like herself again, she learns that she really is a brave, marvelous sexy woman who's not to old to have another adventure. She also learns that nothing is ever how we envision it to be, but that if we're open to possibilities, it can be so much more than we expected. I don't believe Shirley could have experienced what she did if she had stayed in England. Her life at home had grown stagnant, routine and in many ways she felt trapped. She needed an entirely new surrounding to have the experiences that she had. She lost herself in the caring of others and became someone she didn't recognize anymore, in getting away from her home she reclaimed her individuality again, her sense of self and self worth. Realizing she was more than a wife and mother and next door neighbor, she was Shirley Valentine!

Q: What does Greece – a foreign/far away country-represent in this performance?

A: I think it represents a new beginning, a chance to reclaim who she is, a chance to fulfill a life long dream of traveling.

Q: Has Shirley’s journey touched you as a woman and a theatrical artist?

A: Most definitely. For one thing there are a truck load of lines to learn, 64 pages to be exact, not to mention that Shirley acts out 14 other characters. As a theatrical artist it's been a challenge and a huge learning experience. I've had to trust myself, and my wonderful Director John Shillington to find my own bravery and take a big leap of faith that I could do this.

As a woman, and an actress, I take that journey with Shirley every night and it is most empowering. I always feel more in touch with my true authentic self when its over. I feel that I claim my power, my beauty and my epic courage. Shirley Valentine has been and continues to be a beautiful gift in my life, one that I will always treasure and never forget.

Q: What relevance does this story line have for today’s theater goers?

A: Shirley talks near the end of the play about life and how the issues are not just about what happens to her and to other women, but how it's the same for all of us, men included. The play is, at its core, about finding yourself in a life that you did not plan for, where you can't remember what happened or how you got there, that it's not what you want anymore, and that the life you could live is still out there, that we can reinvent ourselves at anytime, at any age, to be the people we can and want to be, to live our life large!

Q: Do you think this one-woman show tells/shows us anything about our humanity? If so, what?

A: Yes! It tells us all that we can change, that we have more life in us than we can possibly imagine and that we just need to have faith, take a leap, and be courageous. That we don't need to stay stuck in a life that does not serve us or help us to be our best selves.

Q: What attracted you to this particular play?

A: When I auditioned for this play all I knew was that I had loved the movie, thought the character of Shirley was funny and charming and thought I'd like to try my hand at doing a One Woman show. I had no idea the journey she would take me on as an artist or as a person. I am blessed to have found her!

Q: Do you and Shirley Valentine share any characteristics, beliefs, etc.? If so, what?

A: I went through a period in my life several years ago after suffering great loss where I was always in fear, I felt I had no courage, and believed that my life would always be that way. Through the love of my husband ( who is nothing like Shirley's Joe), my family and the Theatre, I came out of that period to discover I had more courage than I ever thought possible. I came to believe again that I am a worthy, vibrant, graceful and phenomenal Woman! Just like Shirley Valentine!

I am a strong believer that art can change lives, can lift us up, can reflect our best and worst selves back to us. I believe that the Theatre can save lives, it saved mine.

The driving force behind Mother's Day was Anna Jarvis, who organized observances in Grafton, W.Va., and Philadelphia on May 10, 1908. As the annual celebration became popular around the country, Jarvis asked members of Congress to set aside a day to honor mothers. She finally succeeded in 1914, when Congress designated the second Sunday in May as Mother's Day.

The following information is from the United States Census Bureau

85.4 million Estimated number of mothers in the United States in 2008.

94 percent Among the 37.8 million mothers living with children younger than 18 in 2004, the percentage who lived with their biological children only. In addition, 3 percent lived with stepchildren, 2 percent with any adopted children and less than 1 percent with any foster children.

40 percent Percentage of births that were the mother's first in 2008. Another 32 percent were the second-born; 17 percent, third; and 7 percent, fourth.

Tuesday. The most common day to deliver, with an average of 13,415 births taking place on Tuesdays in 2008.

Jacob and Isabella. The most popular baby names for boys and girls, respectively, in 2009.

71 Number of births in the past year per 1,000 women 15 to 50 with a graduate or professional degree. These women have a higher fertility rate than those with any other level of education.

18,509 Number of florist establishments nationwide in 2008. The 89,741 employees in floral shops across our nation will be especially busy preparing, selling and delivering floral arrangements for Mother's Day.

85 percent The percentage of single-race Asians 25 and older who had at least a high school diploma. This is not statistically different from the percentage for the total population or the percentage of Native Hawaiian or Other Pacific Islander alone, 85 and 86 percent respectively.

14,027 The number of cosmetics, beauty supplies and perfume stores nationwide in 2008. Perfume is a popular gift given on Mother's Day.