White Roses for All Saint's Day

This day is celebrated on November 1st as a day to remember the dead in most cultures around the world. In my El Salvadoran heritage, we know this day to be a Holy Day of Obligation in the Catholic Church. Generally, we go to Mass in the morning and then go to the cemetery to visit our passed relatives for the duration of the day. Every day for years my mother and I have gone to pay our respects to family buried in Colma City which is near San Francisco. We deliver white roses to my Abuelos, Tias and Tios. My mom told me once that the white rose symbolized death and the birth of a new life. I was closest with my Abuelita and her favorite flowers were pink roses, so I would always make sure a bouquet was dropped off for her on this special day.

Here are some examples of how different countries have made their own unique All Saints Day traditions.

Portugal and Brazil: Pão-por-Deus children go door to door and collect cakes, pomegranates and nuts similar to the American version of Halloween.

Sweden, Poland, and Germany: People will light candles in the cemeteries to remember those lost and have now gone to a better place.

What the White Rose symbolizes:

Ancient Greece: It was believed that all roses were white until Aphrodite, the Goddess of Love and Beauty pricked herself on a thorn; that rose in turn came the red rose.

England: At the wedding of Queen Victoria in the 1840’s white roses were predominant and are now considered to be a wedding flower. It symbolizes the reputation of women in society as clean, untainted, pure and innocent.

Ancient Rome: White rose bushes were planted at the graves of deceased young women to indicate their virginity and innocence.

Germany: During World War II, “The White Rose”, an anti-Nazi student political group was set up in Munich. The group was created on ideals of political freedom which also symbolized secrecy, since they couldn’t be public during the Nazi Regime. The White Rose also represented loyalty because the students remained true to what they stood for until their death. When discovered most members were killed and the rose stood for purity of youth.

Italy: In the 16th century, the Pope declared that a rose be carved in confession booths to symbolize confidentiality, secrecy and privacy. In time it also came to be synonymous with spirituality and holy union between those who have passed and life after death.

For centuries this time of year has become a special time to remember loved ones who have passed on. It’s no surprise that people want to believe their ancestors and other family members are all now in a better place; a special place as suggested by the white roses that are placed upon graves around the world.

Posted by folkheart press at 2:31 PM No comments:

Email ThisBlogThis!Share to TwitterShare to FacebookShare to Pinterest
Labels: All Saints Day, Day of the Dead, White Roses

Crimes of the Heart folk heroines 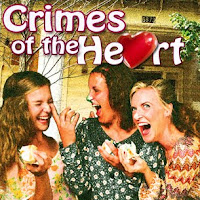 Spousal abuse, birthday wishes and unsung songs all reflect the poignant passions of three Mississippi sisters who form the core of Cinnabar Theater’s production of ‘Crimes of the Heart’ in Petaluma (Northern California).

The Magrath sisters – Meg (Dana Scott), Lenny (Sarah McKereghan) and Babe (Ivy Rose Miller) are folk heroines because they traverse the edges of shared family bonds, including their mother’s suicide and, holding firmly onto one another for support and for courage, leap into an uncharted future that they believe will bring them better days.

Reunited around the table of Old Granddaddy’s kitchen table in Hazelhurst, Mississippi after Babe shoots her husband, the three young women share elements of their pasts they have kept hidden. Meg never did make it in Hollywood, Lenny gave up on her one chance for romance and Babe fell in love with the wrong person at the wrong time.

As typical siblings, they tease, taunt, and love each other in a way that has the audience laughing one minute and anxious the next. Their confessions are hilarious and heartbreaking. Can they be trusted to keep each others' secrets? Will they ever forgive themselves and each other for their choices?

These folk heroines face challenges familiar to us all. Who hasn't made mistakes that alter forever the course of life? Who hasn't felt all alone in the world? And they remind us that sometimes - in the midst of it all - there is hope and that, coupled with the love of those who accept us flaws and all, is exactly what we need to move forward. As these sisters plunge into their futures, so do we, knowing that at any moment any of us may find the love and happiness we seek.

It’s easy to see why “Crime of the Heart” written by Beth Henley in 1978 is an award-winning play. Credits include:

Directed by Sheri Lee Miller, the play runs through November 6. To find out more about this production and the rest of Cinnabar Theater's 39th season offerings, visit www.cinnabartheater.org.

Posted by folkheart press at 8:53 AM No comments: 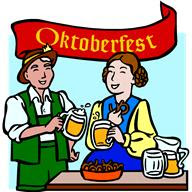 October is a special time of year for beer and food lovers. It’s Oktoberfest time and festivals are one of the easiest ways for people to gather together to celebrate a particular culture.

Oktoberfest is an annual celebration that began in Germany on October 12, 1810 in celebration of the Crowned Prince Ludwig’s marriage to Princess Therese of Saxony-Hildburghausen. King Ludwig wanted the entire Free State of Bavaria to revel in the excitement of his new bride. The celebratory event of choice consisted of a horse race, which drew in a crowd of about 40,000. King Ludwig even named the grassy field where it took place, “Theresienwiese”, meaning Theresa's meadow. The presence of the Royal Family, horse races, and monumental size of the event helped shape it into a celebration of Bavaria, and eventually Oktoberfest. The celebration was held again the following year, but this time included an agricultural aspect in order to boost Germany’s agriculture. Although the horse race eventually was lost from that festival, the agricultural show still remains a prevalent aspect that many festival goers look forward to. Other aspects of the festival include carnival booths, a carousel, swings, and a massive parade, as well as a plethora of German food including sausages, pretzels, chicken, roast pork, dumplings, potato pancakes, sauerkraut, and cabbage.

In the United States each Oktoberfest celebration is unique. Entertainment choices and local foods and beverages all create special regional flavors. Even so you can still count on some things remaining the same everywhere: live Bavarian style music, such as polka music, authentic German foods and German beer. Here are some of the more common dishes:

· Sauerkraut: The most well known German food is finely sliced green cabbage that has been pickled. This gives the cabbage a distinct sour flavor, which is where it gets the name Sauerkraut (sour cabbage).

· Wiener Schnitzel: A breaded veal cutlet that is dipped in flour, egg, and bread crumbs, then fried in butter or oil to a golden brown. It is traditionally served with a lemon wedge, which you can use to drizzle fresh lemon juice over the schnitzel.

· Dampfnudel: A traditional Southern Germany dish made from yeast dough formed into balls that are cooked in a pot with a little liquid (milk and butter or water and butter). As the liquid boils, it both cooks and steams the Dampfnudel.

· Hendl: Whole chickens grilled on a spit and typically sold in halves. Variations are the spit-roasted duck or goose.

Most Popular Oktoberfests Outside of Germany

Posted by folkheart press at 4:56 PM No comments: 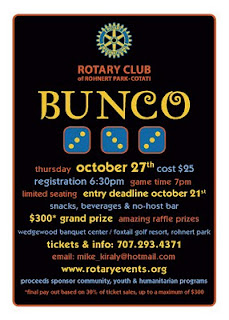 In the world of folklore games provide people with an opportunity to get together and have fun. For children, the rewards are often very simple: toys, the joy of doing something with friends, etc.

For adults, games can take on a different tone. Prizes are perhaps more elaborate and selective and the focus becomes more fixed upon beating the odds and/or outwitting luck.

There are few games that have lasted throughout the course of a century, and Bunco proves to be one of them. A dice game of pure luck that has been redefined throughout the years, it continues to be one of the most popular played games in the United States. From it’s early beginnings in 18th-century England it has continued to gain popularity and now even has a Facebook application. In fact I found seven different Bunco Facebook Pages from all over the country!

Bunco made it’s way over to the United States, specifically San Francisco around the 1850s, and quickly gained a reputation for being a gambling game. It was played in gambling parlors, also known as Bunco parlors. During prohibition in the 1920s, the game was re-popularized and played in speakeasies, where police squads, nicknamed “Bunco squads” would raid the venue.

The game made yet another come back around the time of the 1980s but gained immense popularity in America around 2005. It has been reported by the World Bunco Association that in 2006, 27 million people played Bunco. Currently, Bunco is played by anyone from young adults to the elderly and can be played in a home setting or a fundraiser.

A popular trend for women is having “Bunco Parties” where a hostess will invite women over to play the game at her house and provide food and beverages. The women will often take turns hosting the other ladies. Prizes create an edge to the game and offer an incentive. Bunco fundraisers are also becoming increasingly popular and have created a new avenue in the fundraising world.

Among young adults, the game has also been turned into a drinking game, affectionately entitled, “Drunko”.

The rules of the game go as such: Bunco is a dice game played in different rounds. There are teams of two and they sit at a table of four. The goal of the game is to accumulate as many points as possible for your team. During each persons turn they try to roll a specific set of numbers that are given. If they roll at least one of those numbers, they can continue to roll until they do not score anymore. If they roll a three of a kind, they score five points and if they score all three numbers that they were suppose to, they score the ideal twenty-one points. The first team to score twenty-one points wins. Since there are several teams playing, everyone (even at other tables) must stop when the original winners call, “Bunco!”. Whichever team has the highest number of points at that time wins for that table. At the end of each game, the losers go toward the losing end and the winners move up towards the winning end. Partners are also switched to avoid playing on the same team as someone twice.

Above all, Bunco is a social game. It invites people of all backgrounds to come together and relax while playing a fun game and interacting with others. Many times the game is accompanied with appetizers, snacks, dinner, dessert, cocktails, wine, and many other delectable treats. It gives people an excuse to drop their troubles at the door and get caught up in the festivities.

If you're in the North San Francisco Bay Area on Oct. 27 and want to experience the game for yourself, come check out the Rotary Club of Rohnert Park-Cotati's Bunco Tournament. Who knows, that might be your lucky day!

Posted by folkheart press at 5:22 PM No comments: