His prose-poem story, Dead Man's Shoes,  was selected just in time for Halloween. Prizes included being featured in the blog and in the monthly FolkHeart Press e-newsletter AND  a $25 gift e-card from Sweet Lolllipop Shop!


In the alley in the rain with his head in his hands things weren’t going as Willy had planned.
Broke, forlorn and driven to drink. Into the pits of perdition he was beginning to sink.
His wife was gone and his dog had died. He was running rather low on strength and pride.
Sitting and staring as the rain came down. If his mouth had been open he would probably
drowned.
Out in the alley with the rest of the trash, heartbroken and blubbering with zero cash.
Poor little Willy had nothing to lose when he stumbled upon the dead man’s shoes.
Wingtips they were polished and bright and they shone like a beacon in the dark of the night
Inside of the shoes were the dead man’s feet with the rest of him there like a side of meat.
There in the alley: Stiff, spoiled and dead with black plastic bags for his final bed.
Off they came, quick as a flash and the dead man’s body sunk in the trash.
On they went and Harry stood tall. They fit rather well though a little too small.
Into a grin his lips stretched wide and he felt his body filling with pride.
Suddenly then his heart ceased to pump and his head hit the ground with a terrible thump.
Along came Hector, dejected and alone. He was feeling the loneliness deep down in his bones.
Poor little Hector had nothing to lose when he stumbled upon the dead man’s shoes.
Posted by folkheart press at 3:17 PM No comments:

One of the most common folklore motifs for women is that of the witch, the sorceress. And Halloween is definitely one of her most popular times of year.  Also known as wise women since the medieval times, they have been feared for their ability to create and use powers of magic power to form potions and ointments that can dramatically change those they come into contact with.

There is a lot of folklore that surrounds the appearance of a witch.  Her pointed hat, for instance is more than just an accessory.  The point has actually been known as “the cone of power or wisdom”.  It is said that the hat helps power flow from a higher source into the mind of the witch.

The green face of a witch is another common feature. A witch’s green face is said to originate from the beatings they received during medieval witch hunts.  Old, unattractive women were the primary targets during these witch hunts.  Until they confessed their participation in evil magic, the women would be beaten and dragged through the streets. This is what turned their faces green, blue and black with bruises.

Commonly associated with the witch is the black cat.  Prior to the black cat's relationship with a witch, they were actually known for good luck.  However, the black cat quickly turned into a symbol of fear once their loyalty and faithful companionship to witches was redefined.

The broom, a common household object in medieval Europe became another accessory. Some believe that witches cleaned their brooms using hallucinogenic herbs that had magical powers that could only be rubbed in during a broom ride. 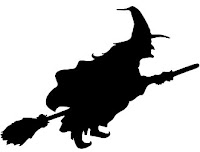 Circe-  A mythical sorceress remembered in Odyssey.  She was skilled in the magic of metamorphosis and the power of illusion.  Her most known feat was that of  transforming Odysseus’ men into swine. She did so by replacing their wine with potion.  She turned them back into men only after Odysseus agreed to sleep with her.

Wendy the Good Little Witch- We all know Casper the friendly ghost but what about his companion Wendy the Good Little Witch?  Wendy was introduced as a fictional cartoon character by Harvey Comics in the 20th century. Contrary to being mean and cold hearted, she only uses her magic for good.  TV episodes about the same character revolve around her resistance to her aunts who wanted her to use her powers for evil.

Mabaa- Known to be the most powerful witch featured in the Japanese comics Soul Eater.  She, along with her fellow witches, has the natural ability to perform magic used for destruction.  She also possesses the power of Soul Protect which disguises her soul as ordinary to hide herself from the witch hunts.

Fenella Feverfew- A young female witch who is fascinated by forbidden spells and potions.  Her character originated from a book series and grew into a film titled The Worst Witch.  Nicknamed “Fenny”, she is best at using spells to get her and her friend out of complicated situations.
How many witches do you know?

This post was co-written by Caitlin Petrucelli. Thanks, Caitlin!
Posted by folkheart press at 4:39 PM No comments:


Nursery rhymes with their sing-songey style are easy to remember. Maybe that’s why they’ve been so popular with children. They are catchy because the words and the melodies create a cadence that is pleasing.

An oral tradition, most nursery rhymes were not written down until the 18th century, when the publishing of children's books began to be more commonplace.


Simple in nature, these folk poems have been an ideal way to convey information and can generally be identified as either a lullabye or game song, In all cases, the information varies from historical events to folk beliefs about love and marriage, and death.

For example,"Baa, Baa, Black Sheep" is believed to reference the slave trade. "London Bridge is Falling Down" recalls the burial of children in London. "Mama Zamanha Gaya" is an Egyptian rhyme about a child's mother coming home.

Lullabies are those used to help children go to sleep were lullabies. “Rock a Bye Baby” is a well-known example.

They are the  oldest children's songs and exist in every human culture. It is believed that the Roman nurses' lullaby, 'Lalla, Lalla, Lalla, aut dormi, aut lacte', may be the oldest to survive.

Game songs are connected to particular games, including  clapping games like 'Miss Susie', and 'Mpeewa' played in parts of Africa. Unlike lullabyes, they are often sung by children and can have an educational element to them. Many traditional Maori children's games, such as hand movement, stick and string games, were accompanied by particular songs.

Some have suggested that skipping games and their related nursery rhymes could have been important in the formation of hip hop and rap music.

Here are a few examples of nursery rhymes based upon history: