April Fools' Day, also known All Fools' Day is an April 1 folk custom that is recognized and celebrated in a variety of countries as a day when people play practical jokes and hoaxes on each other.
Historically, this day has its roots in the Roman festival of Hilaria which took place at the end of March and the Medieval Feast of Fools that occurred at the end of December.
According to the Museum of Hoaxes in San Diego some are more popular than others. Here are their top 3:

#1: The Swiss Spaghetti Harvest
On 1 April 1957, the respected BBC news show Panorama announced that thanks to a very mild winter and the virtual elimination of the dreaded spaghetti weevil, Swiss farmers were enjoying a bumper spaghetti crop. It accompanied this announcement with footage of Swiss peasants pulling strands of spaghetti down from trees. Huge numbers of viewers were taken in. Many called the BBC wanting to know how they could grow their own spaghetti tree. To this the BBC diplomatically replied, "place a sprig of spaghetti in a tin of tomato sauce and hope for the best."

#2: Sidd Finch
The April 1985 issue of Sports Illustrated contained a story about a new rookie pitcher who planned to play for the Mets. His name was Sidd Finch, and he could reportedly throw a baseball at 168 mph with pinpoint accuracy. This was 65 mph faster than the previous record. Surprisingly, Sidd Finch had never even played the game before. Instead, he had mastered the "art of the pitch" in a Tibetan monastery under the guidance of the "great poet-saint Lama Milaraspa." Mets fans celebrated their teams' amazing luck at having found such a gifted player, and they flooded Sports Illustrated with requests for more information. In reality this legendary player only existed in the imagination of the author of the article, George Plimpton, who left a clue in the sub-heading of the article: "He's a pitcher, part yogi and part recluse. Impressively liberated from our opulent life-style, Sidd's deciding about yoga —and his future in baseball." The first letter of each of these words, taken together, spelled "H-a-p-p-y A-p-r-i-l F-o-o-l-s D-a-y — A-h F-i-b".

#3: Instant Color TV
In 1962 there was only one TV channel in Sweden, and it broadcast in black and white. But on 1 April 1962, the station's technical expert, Kjell Stensson, appeared on the news to announce that, thanks to a new technology, viewers could convert their existing sets to display color reception. All they had to do was pull a nylon stocking over their TV screen. Stensson proceeded to demonstrate the process. Thousands of people were taken in. Regular color broadcasts only commenced in Sweden on April 1, 1970.
Want more laughs?
Posted by folkheart press at 12:30 PM No comments: 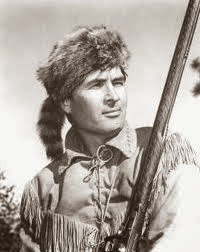 Davy Crockett was more than just a frontiersman in a coonskin cap. He was a hunter,  a congressman, a defender of the Alamo, and a good family man. While many know him as a larger-than-life folk hero, the real life story of Davy Crockett is just as legendary as the fiction.

Born on August 17, 1786 in Tennessee, he was the fifth of nine children. At just 8-years-old he learned to shoot his first rifle. Unfortunately when it came to attending school,  Crockett was not at the top of his class.  According to Biography.com, after only four days of attendance, he beat up the class bully. Afraid to face either punishment or revenge, he ran away from home and spent the next three years wandering and honing his skills as a woodsman. Thus, the king of the wild frontier was born.

After the War of 1812 broke out, Crockett signed up to be a scout in the militia and served until 1815. Born a natural leader, Crockett went on to become a three-time congressman. However, his political career ended in 1835 when he failed to get re-elected. Disillusioned with politics, he joined the fight in the Texas War of Independence, where he ultimately was killed at the Battle of the Alamo.

Davy Crockett was clearly an outstanding frontiersman, and a successful politician, but these attributes alone would not have earned him lasting fame. During his political campaigns, Crockett packaged himself as a larger-than-life frontiersman, using frontier lingo and tall stories to win votes.

Thus becoming the epitome of the rough, unwashed, dangerous West of Jacksonian America. Rediscovered by Hollywood in the 1940s and 1950s, motion pictures and TV have immortalized him as a frontier superhero for the twentieth-century.
Posted by folkheart press at 10:02 AM No comments:

The North Bay Black Chamber of Commerce announces the recipient of this year’s Business Woman of the Year award is Anne DeClouette, Dean of Business and Professional Studies at Santa Rosa Junior College. The award will be presented at the chamber’s free Women’s History Month celebration held Friday, March 21, 5:30-7:30 pm at A Taste of Sonoma Wine Baskets located at 1011 2nd Street, Santa Rosa.

Anne DeClouette moved to Santa Rosa from the Oklahoma City area last July to become the Dean of Business and Professional Studies at Santa Rosa Junior College. As a business educator, she has worked as faculty and an administrator at all levels in higher education. Before becoming an educator, Anne worked in financial analysis at Fortune 500 companies, to name a few: General Motors, Exxon, Texas Instruments and Honeywell and has lived all over the south, central and western United States. She's been married over 20 years to her college sweetheart and they have two sons.

“It is a privilege to honor the work Ms. DeClouette has done in this community. We are also looking forward to sharing this event with the public,” said Letitia Hanke-Ryzhkov, president, North Bay Black Chamber of Commerce. NBBCC is comprised of local business owners, potential business owners, professional and business partners and alliances dedicated to promoting, supporting and enhancing all businesses, in particular black-owned businesses. This is accomplished through various network venues and forming partnerships and alliances with business entities offering business contracts and various business opportunities.

The evening is hosted by chamber member Kimberly Zander, owner of A Taste of Sonoma Wine Baskets. For more information, call 888.846.5155 or visit www.nbbcc.org.
Posted by folkheart press at 9:37 AM No comments:


One Scroll at a Time

Ancient Greek and Latin literature is hard to come by. However in Herculaneum, Italy an entire library from the ancient Mediterranean was recently discovered. Thousands of years ago, in 79 AD, Herculaneum, on the Bay of Naples, was a vacation spot for many of Rome’s top families during the hot Italian summers. This relaxing spot was also a place where Rome’s richest engaged in cultural one-upmanship. The most loyal was politician and father-in-law of Julius Caesar, Lucius Calpurnius Piso Caesoninus, who even built a luxurious seaside villa.

When Piso’s villa was excavated in the 18th Century it was found to hold over 80 sculptures of the highest quality. The luxurious villa, known as the Villa of the Papyri, also contains the only library to survive from the classical world. The library contains about 2,000 scrolls, which were nearly destroyed due to the catastrophe in 79 AD. The scrolls took another hard beating in the 18th Century, when excavators and treasure hunters mistook them for lumps of charcoal and burnt logs and burned them as torches. Once they realized what they were challenges included unrolling them, keeping them in one piece, and reading them. Within the last 15 years, this luck changed when scientists from Brigham Young University in Utah examined the papyrus using infrared light. Deep in the infrared range they were able to see the contrast between paper and ink. It was finally possible to read some of the readings. In 2008, further advances revealed detail of the scrolls that even included different handwritings.

Although the scrolls have not all been unrolled, what has been discovered has mostly been Greek material. The major discovery is Philosopher Epicurus’s text On Nature. Many of the texts that have emerged so far are believed to have been written by a follower of Epicurus, the philosopher and poet Philodemus of Gadara. The extensive search has lead classic’s professor at New York University, David Sider, to believe that Piso’s villa was not only vacation home, but Philosdemus’s own working library. Piso was Philodemus’s patron.

Many of the scrolls originally recovered have yet to be read due to the tedious task of unrolling and translating. Italian authorities are also reluctant to permit further excavation, due to the new residents who live in Ercolano which was built on top of Herculaneum.

We only have guesses of what these scrolls originally were, however, with continued research professors and scientists hope to discover more great works of classical literature.

Check out fun and unique places to store your classical literature here.