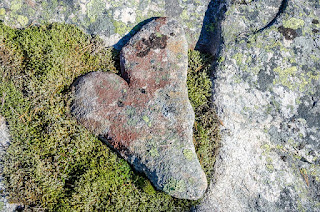 Stones have always had a  special place in folklore. Stone folklore includes wishing stones, tossing stones and healing stones; all powerful geological creations that could offer people unique opportunities to change the course of their lives.

An apacheta, according to Inca culture, is a stone cairn or rather a shrine of sorts that is built along a trail as a special place where an individual can atone for their sins or ask for forgiveness. This place was believed to be endowed with supernatural powers from the gods. Such locations and/ or objects found there (or left by others) were viewed as holy and were referred to as huacas. These special sites were found around springs, caves, mountains, and rocks.


Their tradition required the recital of incantations to the gods for protection and for permission to pass through the region.


Apachetas have been part of Inca culture for centuries and are best known in Latin American countries such as Argentina. They were built as the Inca ascended the Andean mountains; over time individuals placed a stone alongside or on top of the pile of stones they came upon.


Sometimes, rather than a stone, sea shells and other sacred items such as specific tree leaves would be used.


Besides being spiritual in nature, apachetas also served as markers for the hiking trails of the Inca along the mountain terrain. The Inca also used them as an identifier for trails that crossed through the mountains’ rugged, uncertain terrain.

According to Irish folklore Bullaun stones were among the most powerful place one could go to utter a blessing, or a curse. They were recognizable by their hollowed centre which some think might have also been used for baptisms in early Christian times.


Some folklore indicates that the rainwater collected in the stone's hollow had healing properties and although they are believed to have been created during Neolithic times, old Christian legends say that the original stone was created in the 6th century when at birth Saint Aid's hit his head on a stone. 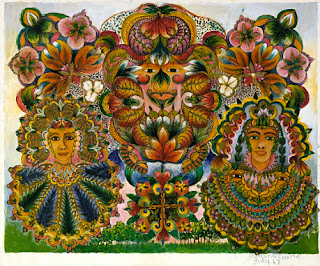 Minnie Evans was a maker of mythical creatures. This southern African American folk artist used a variety of media – including wax and crayon - to draw the visions and dreams she had as a young girl.

Born Minnie Eva Jones December 12, 1892 in North Carolina she attended school until the sixth grade. In 1903. Five years later as she worked she married Julius Caesar and together they had three children.

She worked as domestic help for a wealthy industrialist. In time, after deaths, remarriages, and property sales Evans, still employed by a member of the family who converted the lavish estate into gardens, became the garden’s gatekeeper.

While she maintained that position until 1974 (she was 820 she also created her legendary folk art.

At the age of 43 she took up pen and ink and began to draw on a paper bag. Reports note that while she created the concentric images she allegedly heard a voice in her head, asking her ‘Why don't you draw or die?'


She would not return to her artwork for another five years. At that time her pencil and wax on paper and mixed media collage subject material was typically biblical or scenes from the natural world. Her subject matter were usually either biblical scenes or scenes from nature.  According to those who interviewed her the primary influences were African, Caribbean, Chinese, East Indian and Western Cultures.


Many of her pieces centered on a human face surrounded by plant and animal forms. The eyes, which Evans noted were symbols of divine omniscience, were prominent and in some cases there were three eyes. Her idea of God was also depicted with wings and multicolored collars and halos on the flora and fauna.


Evans hung her pieces at the garden gate and people began to buy her pieces. Overtime she became better known and visitors would come to the gardens just to see her work.  Her first ‘formal’ art exhibition at the garden was in 1961.


A fellow artist helped to launch her career in New York City. Evans died December 16, 1987 at age 95, leaving more than 400 artworks to the St. Johns Museum of Art (now the Cameron Art Museum) in Wilmington. After Evans's death, artist Virginia Wright-Frierson designed and built the Minnie Evans Bottle Chapel at Airlie Gardens in her memory. "Minnie Evans" day was proclaimed on May 14, 1994 in Greenville, NC.

Related Information:
The Angel that Stands By Me: Minnie Evans' Art
Folk Art

Photo of artwork (Design Made at Airlie Gardents)  on display at  Smithsonian American Art Museum
Posted by folkheart press at 11:00 AM No comments:

The Year of The Monkey 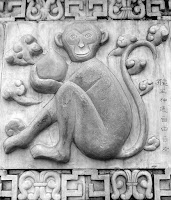 According to the Chinese calendar February 8 begins the year of the Monkey. The Chinese New Year, which is lunar ends on January 27, 2017.

What is the Monkey?

It is the ninth of 12 animals in the Chinese zodiac. It occurs every 12 years and this particular year is a Fire Monkey Year.


All animals in Chinese astrology are associated with one of the five elements: Gold (Metal), Water, Wood, Fire, or Earth.


Traditional Chinese wisdom states that both the sign and element of your birth year are said to affect your personality and destiny.


This chart explores the characters ascribed to each of the Monkeys (signs and the related element). 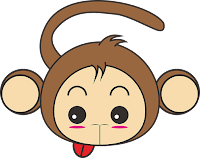 People born in a year of the Monkey are said to be witty, intelligent, and have charisma. Their traits include mischievousness, curiosity, and cleverness, all of which we have learned by observation, monkeys are.

They are masters of practical jokes, because they like playing most of the time. These fast learners can quickly sieve opportunities.

Since much of Chinese folk wisdom is based upon luck, an elaborate system of what is lucky and unlucky can help to direct the gods in your favor.

Here are some lucky things for Monkeys:


Lucky days: the 14th and 28th of any Chinese lunar calendar month


To avoid bad luck, Monkeys should be aware of these omens: