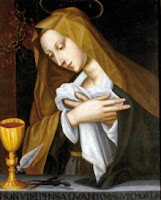 This classic Renaissance folk artist was a  self-taught painter and illustrator. A  Dominican nun - at 14 -  in Florence she was born in 1524 as Pulisena Margherita Nelli.

She was a prioress at Santa Caterina da Siena in Florence, Italy that was led by Dominican Friar Giraloma Savonarola. He encouraged religious women to created devotional painting and drawing.

It is believed that he did not approve of them being idle so art became an acceptable, approved activity.


16th century historians note that her inspiration evolved from copying works of painter Fra Bartolomeo who was known for his religious paintings.  Art critics report that her portrayals reveal a depth of emotion on her characters' faces.

And she captured this depth despite the fact that she had no formal training.

Although her subjects were 'traditional' themes that followed acceptable stylistic forms, they can still be considered folk art. Folk art is art produced by non-professional/trained artists.

Interesting to note, however, that as a result of her religious vocation, she did not paint nude males. As a result, according to historians,  her male figures are said to have “feminine characteristics”.

Her work however was supported by both male and female patrons and included large-scale paintings, book illustrations, and drawings.

She was among folk artists featured in the Emmy-winning PBS television documentary Invisible Women, Forgotten Artists of Florence, The film was based on Dr. Jane Fortune’s book by the same title which hails her as the first woman artist of Florence.


It is interesting that Nelli lacked any formal training. That combined with her religious vocation (which prohibited study of the nude male) resulted in her male figures appearing to have “feminine characteristics".


Some of her works are on display in these Italian museums and churches: 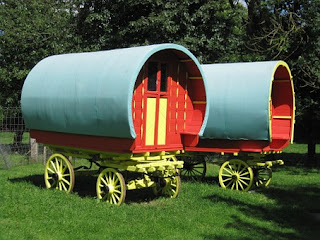 Horse drawn wagons have been around for as long as … well, horses and wagons!

Among the more fascinating types is the living wagon, also known as a caravan or vardo.

It is still in use today by the Romani people, a traditionally nomadic group with Indian subcontinent roots who live mostly in Europe, the United Kingdom and the Americas.

Caravans, old world travel trailers, are often intricately carved and richly decorated. In some instances they are wooden canvases for master folk artists. Many designs became associated with individual carvers.

These homes on wheels, once a year ‘round mainstay, are now more often designed for better weather use.

Historically, they have ties to the wagons were used in the early 19th century by non-Romani circus troupes. The Romani adapted them to provide the comforts of home, including chimneys. Fortunately, the modification also meant that it took fewer horses to pull them. And, as horses were a highly valued resource, the Romani found that cast off horses and mules, which were much more affordable, would do an adequate job.

It is interesting to note that most of the caravan’s treasure is found in the carvings. These hand-carved wagons were painted with traditional Romani symbols, such as horses, birds, lions and elaborate scrollwork. The more expensive wagons were also adorned with gold leaf.

An example of contemporary caravan art can be found in the work of Australia’s Basil Smith.

A lifelong caravan traveler he and his wife have set-up shop. Woodworking talents involve the use of only handmade tools. Other skills involve the ability to make lead stained glass windows.

Flamenco
Posted by folkheart press at 3:00 PM No comments: 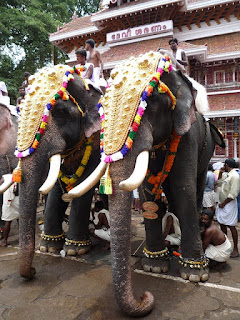 When the moon rises with the Pooram star in Kerala, India the community gathers to celebrate Thrissur Pooram, a religious and cultural festival of festivals every year.


The event, which is celebrated in temples, is scheduled according to the Malayalam Calendar, a solar Hindu calendar that dates back to 825 CE. This year, according to the Gregorian calendar it will take place April 17.


This particular event was developed by the Maharaja of Cochin who in 1798 tried to unite all of the temples with a shared festival.


It is believed that during Thrissur Pooram the gods and goddesses of all temples assemble at Kerala’s Vadakkumnathan Temple. This unification is  dedicated to goddesses Durga , considered to be the principal deity of creation, preservation and annihilation, and can last up to 36 hours.

It is also known as the Festival of Elephants for two reasons. First, it is thought that the deities’ arrive by elephant which is viewed as a sacred animal. Second, there are processions of decorated elephants and ecstatic music to the temple.

One of the more interesting aspects of Thrissur Pooram elephants are the colorful caparisons they wear on their heads. In many cases they are made of gold and can include jewel-like stones and peacock feathers.

Although it is a religious experience it is also cultural. The Kerala community has developed an exhibition that draws a fair number of people each year. It is basically secular in nature so can be enjoyed by those of other faiths.


Another interesting feature of Thrissur Pooram are the elephant caparisons.


Fortunately, along with educating others about this valuable tradition, this elaborate celebration of fireworks and more also provides a source of revenue shared by all of the temples.


Malayalam Calendar
Posted by folkheart press at 9:00 AM No comments: