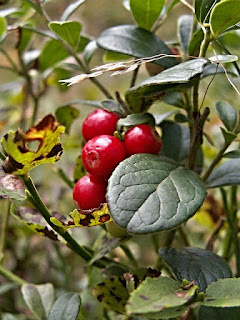 Cranberries date back to medieval Europe, where they were known as marsh-worts, fen-worts, and moss-berries. Across the Atlantic Ocean, Native Americans living in the America’s were also eating and using cranberries for centuries before settlers even came to the America’s and eventually incorporated them into their Thanksgiving dinner.

Traditionally found in bog or swamp environments, cranberries grow on a vine that can be found mostly submerged in water, which perpetuates the common misconception that they grow under water. The settler’s term “cranberry” was derived from the fact that the appearance of the berry was similar to that of the beak and head of a crane. Native Americans, who used the fruit in its raw form as well as dried out to preserve meats, preferred their original term, sassamensesh.

Due to the bitter, sour taste of the cranberry it was and still is most commonly sweetened and used as a condiment or side dish. There is no proof that cranberries were incorporated into the first Thanksgiving dinner between the Pilgrims and the Native Americans, which took place in October 1621, but it is believed that the Native Americans may have brought it as a generous contribution. The prime harvesting time for cranberries takes place between September to December, which would allow for the perfect ripe cranberries for the Native Americans to share with their newfound kin.

Overtime, cranberries continued to have a significant impact on the New England food scene, quickly becoming a staple for the holiday season. The Cape Cod Cranberry Company, who marketed the product as, “Ocean Spray Cape Cod Cranberry Sauce”, first canned cranberries in 1912. Ocean Spray is now the leading corporation for cranberry products.
Cranberries are most often prepared during Thanksgiving dinner in the United States and Canada and during Christmas in the United Kingdom.

The preparation and taste of cranberry sauce varies depending on the area it was harvested and the ingredients added. Almonds, orange juice, zest, maple syrup, port, and cinnamon are all common flavors added for sweetness. The versatile fruit can be transformed into a variety of delectable treats such as cranberry bread, cranberry pistachio biscotti, and cranberry chocolate devil’s food cake.

Do you have cranberry food lore of your own? Click here.
Cranberry Cole Slaw Recipe 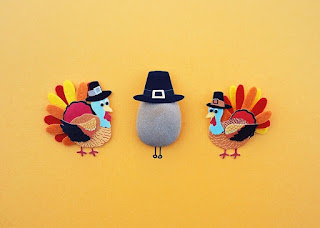 A Historical Turkey Ride
For four centuries Thanksgiving has been a time to show appreciation of what bounty we have. The tradition began in the fall of  1621 when the Mayflower carried passengers from Plymouth, England in search of a new home. After a long and treacherous journey they finally settled in Massachusetts.

Long before the settlers arrived the area was inhabited by many Native American nations, among them the Wampanoag. The natives who been there for a very long time knew how to live well off the land they hunted, fished, and harvested. Chief Massasoit, the Wamapnoag leader, offered to help the pilgrims learn how to use the land in exchange for mutual protection. And so the Thanksgiving feast tradition began with a  shared harvest celebration.

Here are more facts about the history of this day of thanks:


1)    The famous “Pilgrim and Wampanoag” story featured in modern Thanksgiving narratives was excluded from earlier Thanksgiving legends, largely due to tensions between Indians and colonists.


2)    Held every year on the island of Alcatraz since 1975, “Unthanksgiving Day” commemorates the survival of Native Americans following the arrival and settlement of Europeans in the Americas.


3)    President Abraham Lincoln declared the last Thursday in November as a national day of Thanksgiving, and in 1941 Congress established it as a national holiday.


4)    The original Thanksgiving feast in 1621 occurred sometime between September 21 and November 1. It lasted three days and included 50 of the 112 pilgrims inhabitants and approximately 90 Wampanoag members. Their menu included berries, shellfish, boiled pumpkin, and deer.


We hope this year your Thanksgiving is filled with gratitude and joy.
Posted by folkheart press at 4:18 PM No comments: 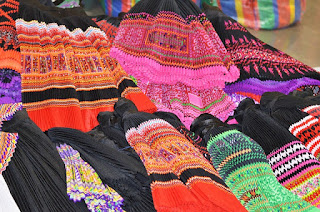 Storytelling is a way of life for most people. Our adventures become lessons that can help others. Storytelling takes many forms: oral, written, visual, and art. For the Hmong people, an Asian ethnic group that suffered severe reprisals as a result of alliances during the Vietnam War, storytelling is a told through story cloths. These folkloric renditions of fabric tell stories about the journey from their homeland farming villages to refugee camps in countries like ours.

The San Jose Museum of Quilts and Textiles is hosting an exhibit of these colorful and vibrant stories. “Hmong Story Cloths: Stitching a History”, which runs through January 15, 2017, reveals the ways women decided to record their daily lives. The cloth journals include mundane acts of collecting water and harvesting as well as the more dramatic events, including marriages, annual customs and more.

Originally the Hmong people lived in the Yellow River region of China. Political repression by the Chinese government pushed them into Northern Vietnam between 1790 and 1860. Eventually, they migrated to the mountainous areas of Laos, Burma, and Thailand where they lived and farmed successfully for about one hundred years.

Their story cloths, also known as "flower cloth" represent folk art traditions like those found in other ethnic minorities in China. Embroidered bold geometric designs in different patterns reflected geographical regions. For example, batik is more common among the Green Hmong. However, the mass exodus brought groups together and over time, some patterns have found their way from one group to another. And, some pieces now also incorporate American color and pattern preferences.

The colorful strips were originally applied to clothing but can now be found on pillows, blankets, and even as stand alone folk art pieces.