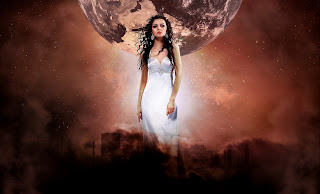 Each season comes with its own deities. These supernatural beings bring both blessings and curses. Like us, they can also fall to temptation and vices. They can also be pure enough to lead the way for human beings who heed their example and advice.

The Queen of Winter in Scotland is Beira. The gifts of this mother of all gods and goddesses include the creation of numerous mountains and large hills, which are said to have been formed when she was striding across the land and accidentally dropped rocks from her wicker basket. She also built the mountains to serve as her stepping stones and reportedly shapes hills and valleys with a hammer.

According to legend, she can herd deer, fight spring and freeze the ground. Beira was a one-eyed giantess with white hair, dark blue skin, and rust-colored teeth. She turned her negligent maid Nessa into the river Loch Ness.

Her reign occurs during the winter months November 1 to May 1.


Other Deities of Winter

The North Wind which does not disturb evergreen trees in winter because they shelter wounded birds.

The Norse Goddess Skadi who brought skis and snowshoes to her people.

The Aztec god of frost Itzlfaeoliuhqui came into being when the dawn god was struck by one of his own arrows.

Credit for the first winter solstice goes to Louhi, Mistress of the North who battled Finnish heroes and then stole the sun and moon from the sky.

Bulgarian winter spirit Koleda gave people the knowledge of the universe and the celestial bodies. He gave them a book about the stars.

There are many more winter spirits, such as Jack Frost and the Snow Queen.

Posted by folkheart press at 3:56 PM No comments: