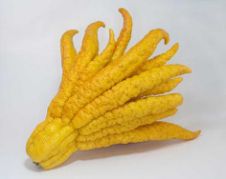 
For any fruit to be named “The Buddha’s Hand,” I would imagine that it must live up to its name! Although this citric fruit is composed mostly of rind (little if any juice), it has multiple uses that make it very practical and yet beautiful and intricate at the same time.

With origins that trace back to Northeastern China, the Buddha’s Hand is a yellow citrus fruit that grows from a smaller bonsai type tree. In China today it symbolizes happiness and long life, because its name, “fo-shou”, has those meanings when written with other characters. In Japan it is called bushukan which i means “fingered fruit”. There it is a popular New Year gift that bestows good fortune on a household.

Historically, this fruit evolved from the original cinturon that was originally grown in the lower Himalayas. It was only until the late 19th century that the fruit was exposed to places such as California.

When fully grown the shape of the fruit looks as though it has elongated fingers. The Buddha’s Hand has an extremely thick rind, rarely containing any juice or seeds in contrast to most citrus fruits. One of its main qualities is its beautiful scent. Used to decorate tables, its scent can be smelled from one room to the next and has been used to perfume clothing.

One of the most important uses for the Buddha’s Hand is for religious purposes. The fruit is often given as an offering in Buddhist temples. It’s important to give the Buddha the fruit when its fingers (elongated branches of the rind) are closed together in the center. It is believed in Japanese tradition that the Buddha appreciates when the fruit is in this form because it resembles the act of prayer.


Posted by folkheart press at 2:42 PM No comments: