The Folklore of Trolls Big and Little 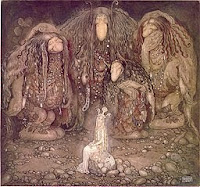 Trolls are a popular folklore image known around the world to be a race of fearsome human-like creatures. In Norse mythology they are the equivalent of giants, although often smaller in size. In England they are likened to ogres and folk of the wilderness who live underground in hills, caves or mounds.

Trolls appear in many fairytales. While the everyday folklore consisted mostly of short anecdotes describing things that had (supposedly) happened to local people, fairytales are narratives that rarely claim to be true in the same way. Many of the fairytales featuring trolls were written in the late 19th century to early 20th century, reflecting the romanticism of the time. Prior to that, they had been featured as distinctly bad creatures.

Today’s trolls come in any size and can be as huge as giants or as small as dwarves. Considered to be of poor intellect (especially the males, whereas the females may be quite cunning), they allegedly have great strength, big noses, long arms, and are hairy. Female trolls are generally perceived to be cunning and comely.

Nancy Reid, Publisher & Production Director of Big Blend Magazine/Big Blend Radio reports that her family folktales include a longstanding troll who has been held responsible for a variety of mischievous deeds. Here is how she describes the troll:

Nancy’s troll has much in common with his ancestors. He has an imperfect physique and minimal mental capacity. His manner of eating is very much akin to those of wild people. And yet he is different from the trolls of the past.

His ability to be terrifying has been transformed by one significant fact: he is attached in some way to Nancy’s family that makes him a member of their household.

Nancy and her daughter Lisa Smith (Editor, Big Blend Magazine) tell stories and even laugh about his pranks which, according to the family legends, have been happening for generations. He hides things and causes confusion much like one would expect from a trickster; his behavior is more frustrating than harmful.

It appears that over the years (and generations) he has endeared himself to them. This could open up a whole new world of troll folklore!

Posted by folkheart press at 8:27 AM 4 comments:

Folktales often provide insights into our beliefs about the world we live in. Whether they are about a person, place, activity or event in the past or the present, they show us how people have handled the challenge of living their lives with dignity and purpose.

Here is a surfing folktale (narrative essay format) by Ricky Roberts, author of Where Did The Gift Go (Tate Publishing) about a memorable encounter he had on the beach one day while enjoying a favorite activity, surfing. In it he shares his understanding about the relationship between the natural world and the spiritual world.

We all find our rhythm, connection, and relationships in our own way, place, and time. Regardless of how you may find your peace, or what you may call it, just allow it, and the details will become clear in their own time.
This brings me to an experience that I had surfing one day. The waves were fun, and the weather was amazing! The sun was about to set, and the sky began to work its magic, turning many shades of orange and blue. It was beautiful! There was a guy next to me that I told how thankful that I was to be there. I also made the comment of how much of a blessing it was to see it. After the blessing comment, he asked me where I went to church. I said the name of the churches that I would attend at that time in my life, when I was inspired to do so. There always seems to be more than one church that I am drawn to, and I always do my best to listen to where I need to be for that day, if I need to be there at all. I went on to tell him that I sometimes find my church in the water surfing, or at a park. I also added that I don’t necessarily attend church every Sunday; if I’m led to be outside then that’s where I will be. I said, “I do my best to be in tune with where God leads me to be, at all times, Sunday or not.” He began to preach to me without knowing anything about me, or where I am spiritually, and how devoted that I am to following my higher purpose of being here. He said, “You know, brother, you can’t drift away from the church.” I asked him, “What do you think we’re having right now? After all, we are in God’s creation, sharing this moment, talking about his love.” He said, “That’s true, but you do need fellowship.” I said, “I do agree, that’s why I fellowship everywhere I am.”
It is easy to get so caught up in our belief systems that we miss out on what a gift it is to have the opportunity to interact with people on all levels and of all places, and experience God beyond the walls of a building on Sundays.

Ricky has also written YOU, and What Really Matters? His desire to be of service is evident in the passion of his writing. For more information, please his website.

Posted by folkheart press at 8:21 AM No comments:

One of the benefits of festivals is that they can brighten up an otherwise foreboding time of year. This festival promises to be a lot of fun.
I'd love to hear from anyone who attends the festival. Let me know what it was like!

Special guests include Misty River, William Florin and The Brothers Four. There will also be informal musical jam sessions on Saturday and Sunday at designated locations around town. All musicians are invited to participate in the sessions.

In addition to that there will be arts, craft, non-profit and food booths at the Events Center.

Daily performances (included in festival daily admission)include top folk performers from across the US. Headliner concert tickets are on sale now.
Posted by folkheart press at 4:22 PM No comments: