Do you feel like a misfit in your own life and body? Maybe you awoke from a strange dream too vivid not to be real. Have you survived a near-death experience, had an out-of-body occurrence, or dissociative episode, or soul exchange? Others may have noticed the change and made comments like, “You act like a totally different person.” Inwardly, you may be confused, overly sensitive, or so anxious it feels as though your nervous system has been hooked to an electric power line. Regardless of what has happened, you may need help integrating these higher frequencies that are now available to you. Shifting into Purer Consciousness can help you manage the physical and emotional symptoms associated with rapid spiritual progress.
The paragraph above is a description of Yvonne Perry’s latest book, Shifting into Purer Consciousness ~ Integrating Spiritual Transformation with the Human Experience. As part of the virtual tour for her book, I am sharing a video about the book and an article about why Yvonne wrote a book about the ascension process. You may learn more about Yvonne and her book at http://shiftingintopurerconsciousness.com.


Why Yvonne Wrote a Book About the Ascension Process

I originally started to write this book because I wanted to share the story about a huge spiritual transformation known as a walk-in or soul exchange that I experienced in 1999. That event totally changed my life and I began a new spiritual journey that has continued to grow in intensity. There is not much material about the topic and people need help understanding this process, so I thought that writing a book about it might be a blessing to others who are going through significant changes in their lives.
I began journaling that story in 2003 when I first discovered what a walk-in soul is. I put the manuscript aside because I was busy starting my freelance writing business, Writers in the Sky Creative Writing Services (http://writersinthesky.com). I added material to the manuscript in 2005 when I had another significant spiritual event. Then it sat for another five years as I wrote and released four other books.
It was during the process of writing Whose Stuff Is This? ~ Finding Freedom from the Thoughts, Feelings, and Energy of Those Around You that I felt a sense of urgency that the time had come for me to begin writing the book about my spiritually-transforming experience. It wasn’t until after that book was published and my launch for it was completed that I began to seriously get down to the business of writing what I thought would be a detailed encounter of my soul exchange. I soon discovered that my inner guidance was leading me to minimize the details of my walk-in story, expand the scope of the book, and focus on helping people manage the accelerated frequencies of the great shift into purer consciousness that humanity is currently going through.
Many people, who were raised in a religious environment like I was, have a lot of fear regarding what they consider to be the “end times.” This transformational period is actually the earth moving from the Piscean Age to the Aquarian Age on the zodiac. My book sheds light on the science behind the shift and will bring a new understanding to Bible scriptures and doomsday prophecies that have caused great concern for those who believe that the Earth will be destroyed by some cataclysmic event in our near future. It is a message of hope and comfort that teaches how to consciously participate in your own personal evolution as you shift into purer consciousness.
###

Yesterday, the tour stopped at Doreen Pendgracs’ Wizard of Words blog. Tomorrow the tour will be at Denise Demaras blog and I invite you to visit that site to learn more about the spiritual transition we are currently in. See the full tour schedule at http://dld.bz/byrF7.

Posted by folkheart press at 7:51 AM 2 comments:

Email ThisBlogThis!Share to TwitterShare to FacebookShare to Pinterest
Labels: and Energy of Those Around You, Feelings, Shifting into Purer Consciousness, the Ascension Process, Whose Stuff Is This? ~ Finding Freedom from the Thoughts, Writers in the Sky, Yvonne Perry 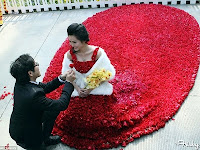 Numbers like words carry a great deal of significance for the cultures that use them. Some words and phrases have special usage and are elicited at key times. These ‘sacred’ utterings  - think of prayers or chants, for example - are believed to have select divine powers.
Same holds true for numbers.

This came to my attention when recently I learned about a dress made of 9999 red roses. The story, which first appeared in the UK’s Daily Mail (written by Sadie Whitelocks) is about the romance of Valentine’s Day.
It begins:
Most women would be content with a bouquet of flowers on Valentine's Day.
But one man in China requested 9,999 red roses before asking for his girlfriend's hand in marriage.
And realising his partner's penchant for fashion, Xiao Fan had each blossom carefully stitched together to form a sweeping, floral bridal gown.

Most likely he proposed to her because Valentine’s Day is designated as the day to celebrate the romantic motif/theme of true love that is a universal belief.

He probably chose to use 9,999 red roses because the number 9 is a very special number in his (and his now-fiancee’s) native Chinese culture.

Here’s some fact and folklore about the number 9 in Chinese culture that make it easy to understand why he chose to propose with a gift that was centered around the number 9:
·         In the traditional culture of Chinese nation, the number 9 is the biggest of the odd numbers as well as the biggest of the single digits (think 0-9). Because it is the biggest and the last of the single digits, it is called the number of heaven.
·         It became a sacred number that was connected to the emperors. The size of the emperors’ palaces and buildings were supposedly based on the unit 9. The gates of the Forbidden City and the imperial gardens are decorated with the nine spikes. In each gate, nine spikes are used in vertical and nine in horizontal, altogether they are 81 spikes.
·         As a numeral, 9 was both definite number and imaginary number in ancient China. As the imaginary number, it means “many” and often more than nine.
·         Nine (pinyin) is considered a good number in Chinese culture because it sounds the same as the word "longlasting" (pinyin).
·         There are nine forms of Chinese dragons.
Here's a quick look at the number 9  in other cultures:
·         Greek mythology has nine muses (Callioe, Clio, Erato, Euterpe, Melpomene, Plyhymnia, Terpsichore, Thalia and Urania.
·        The Japanese consider 9 to be unlucky because it sounds similar to the Japanese word for "pain" or "distress" (kunrei).
·        Traditional enemies of Ancient Egypt were represented by the term nine bows.
·        Written in 13th Century Italy, Dante's Divine Comedy, references nine circles of hell.

To read the rest of this festive story, check out the Daily Mail.

Posted by folkheart press at 6:22 PM No comments: 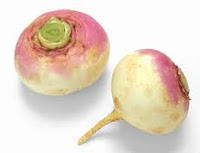 What are Turnips?
Often planted in June, turnips are a vegetables found in soil and are usually grown in temperate climates.  The smaller, tenderer roots of turnips are able to be eaten by humans, but larger, tougher turnips can be used for livestock feeding.  They are really good for your digestive system and are high in Vitamin C.  They have a great crunch to them and are filled with flavor.  Add turnips to meals or eat them by themselves!

Turnip Food Lore
A common food staple, the turnip made its first literary appearance in the late 7th century B.C. Greek poetess Sappho called a paramour Gongýla  (turnip).  During the Roman times, this root vegetable that usually grows in temperate climates wasn’t only a food item. The Romans also used them to express displeasure. Considered “poor people food” they were thrown at unpopular people as well as poorly executed events (plays, etc.).
Packed with Vitamin C and able to be stored for long periods of time before going bad, they were also served to livestock.

Fun Turnip Food Facts:
Interesting Turnip Recipes
Turnip Salad: If you don’t want to cook your turnips, try this recipe for a healthy, flavorful meal.
Marinated Turnips: This recipe is simple and although doesn’t require a lot of work, it contains a great amount of flavor!
Scalloped Turnips: A fun and delicious combination of turnips.  If you are a little one the fence on how you feel about turnips, start with this recipe.
Posted by folkheart press at 2:47 PM No comments:

In the world of folklore which is folk wisdom about what it is we need to know about our communities is the rich and varied landscape of food lore.

Food is essential to survival so how it is grown, prepared and served is pretty important – even when we aren’t aware of the common lore that for centuries and generations has been keeping people healthy and alive.

Food lore, like every other element of folklore (folk art, folk music, legends, etc.) does change with the times. New World immigrants can easily point to the changes they have made in their food ways and customs because of something as simple as geographics.

For example, weather patterns and soil types can provide food substitutions. Rice can be replaced by wheat, beef can replace goat, etc. Along with this are the cultural shifts that occur when people from different parts of the world form new communities. Two such examples are Tex-Mex (a blend of Mexican and Texan foodways) and Asian-inspired Jewish dinners.

In this creative atmosphere there are modern foods, like Pizza, that have deep-reaching roots into the past and can be found in a variety of societies.

The concept of pizza is thought to have originated in Greece, but the earliest forms of pizza making were found in 6th century Persia.  Persian soldiers pressed for time, would spread dough on their shields and place tomatoes and other herbs on top to cook. Ancient Greeks typically added oils and herbs to their pizza, and the Romans were said to use cheese, honey, and bay leaves which were all easily accessible during that time. Pizza grew in popularity in Naples, Italy and was served on the street or breakfast, lunch and dinner.  It didn’t spread to the Americas until the 19th century.

The first evidence of pizza in the US was in Chicago made by a poor man who would try to sell a slice for two cents.  He would make it in his wash bins that were deep, which paved the way for the famous deep-dished Chicago pizza. The first pizzeria to open in the United States was in 1905 by Gennaro Lombardi called “Patriaca della Pizza”.  After World War II where many of the soldiers were stationed in Italy, pizzerias began to flourish in this country.

Here are some fun modern pizza recipes that reflect today’s cultural diversity:
Sunny Side Up: Eggs and bacon pizza.
Thai Pizza: Pizza with an extra kick.
California Pizza: Veggie-style.
Posted by folkheart press at 6:30 AM No comments: