Robin Hood: Who Was He? 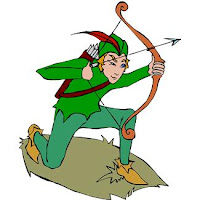 One of the most popular English folk heroes is Robin Hood. This “prince of thieves” stole from the rich and gave to the poor – or so the saying goes. This subject of ballads, books and films has proven to be one of pop culture’s most enduring folk heroes.

Who was this elusive outlaw? Historical searches have turned up numerous possibilities, such as the Yorkshire fugitive Robert Hod, also known as Hobbehod or Robert Hood of Wakefield. Efforts to identify the man behind the legend are complicated because over time the name Robin Hood became a common term for an outlaw. In literature the folk hero was sometimes described as Prince John or Richard the Lionheart.
Here are some fun folklore facts about this Sherwood Forest folk hero who led his gang of Merry Men throughout Englands’ wooded kingdom:

Posted by folkheart press at 5:47 PM No comments:

The celebration of St. George’s Day occurs in several countries around the world, including  Spain, Libya, Canada and Croatia. On this day, people dress up in red and white, and participate in folk dance and enjoy medieval feasts. This day is commemorative of the martyrdom of St. George. This Christian Saint day is generally celebrated on April 23, because that is the day that George died in 303 A.D.


There are many myths and legends about St. George and what he accomplished in his lifetime. It is said that he was born in Eastern Turkey, and moved to Rome to become a solider. After his service in the military, he faced a major religious conflict in Palestine. He refused to recant his faith as a Christian during a time of persecution of those who followed the Christian faith. Therefore the Emperor ordered for his beheading for his dedication to his faith. Christians around the world recognize his bravery, and he is immortalized in the hearts of many European, Canadian, and Middle Eastern people who share his faith.


Today, St. George is the Patron Saint of England. His feast day is celebrated annually, and individuals participate in folk events. England represents St. George Day as a feast day for all to enjoy music, food and patriotic unity. Spain also celebrates the feast day of Saint George with great enthusiasm. For example, in Catalonia, Spain the Christian people celebrate “La Diada de Sant Jordi” annually. St. George’s Day is a celebration of loved ones. In the myth of St. George slaying the dragon, he save the princess and presented her with a red rose. This day is now spent giving gifts to sweethearts, friends or coworkers. Millions of roses are exchanged on this day, as well as thousands of books.


The exchange of books as holds significance for the United Nations Education, Scientific, and Cultural organization that declared this same day, April 23, International Day of the Book. Roses have been traditionally involved since the middle ages, and in more recent history books are traded gifts as recognition for writers Miguel Cervantes and William Shakespeare who died in April 1616.


Overall, this feast day represents faith and goodwill. Those who celebrate St. George’s Day commemorate his heroism and commitment to the Christian Church.

Posted by folkheart press at 12:24 PM No comments:

In the spirit of April’s National Frog Month, here are some examples of folklore and mythology surrounding this amphibious creature; especially its development from infancy to maturity. Frogs must go through the process of metamorphosis to reach the stage of being a frog. They start as tadpole, and then sprout tails and gills, and soon after that have legs and can be land or aquatic living creatures. It is no wonder they represent birth and transition in many cultures. Some societies also believe that frogs represent fertility, healing, and opportunity.Here are some examples of folk knowledge and wisdom:


Posted by folkheart press at 2:10 PM No comments: 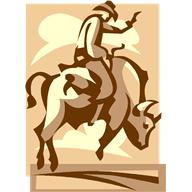 As the west became more developed the need for cowboys dwindled. Under the Manifest Destiny policy that the American government implemented, cowboys turned to honing their cattle handling rodeo skills for entertainment purposes rather than small territory rivalries.
Among the first most famous Wild West showmen was Buffalo Bill Cody, who became the lead organizer of the shows that are now referred to as “rodeos”. Rodeo pageantry is still present today.

As cowboys and cowgirls prepare for competition they pay attention to rodeo  superstitions that have evolved and been shared by word of mouth. Here are a few fascinating ones:

Never set your cowboy hat on a bed. This is based on the idea that a bed is a resting place, and if a hat is set on the bed then it is likely to bring injury or death to that rider.
Wear two different colored socks.  This good luck omen has also been applied to other sports.

The Red Bluff Round Up competition is hosting their 92nd rodeo, on April 19-21st. The daily event includes barrel racing, tie-down roping, and riding competitions for both men and women. For details, click here.
Posted by folkheart press at 10:54 AM No comments:

The Folklore of Swallows 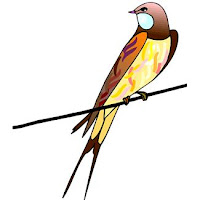 The animal kingdom has long been a part of folklore. The woolly mammoths, bison, and even earlier creatures of the natural world were a mystery that could only be understood through stories. Not only were they sources of sustenance, they were friend and/or foe, depending upon the situation.  In an effort to know how best to relate to them, people developed traditions and customs to protect themselves against threats these animals might pose.  The lore also helped to explain the animals' connections to the mysterious spiritual world.

The understandings that helped to dispel fears and ensure safety appeared again and again in tales, myths, folk art and even folk dance.  In almost all cases, the animals were considered to be clever, wise, foolish, magical and/or destructive, just like human beings.

Birds, in particular, were credited with being able to fly between worlds. As such in many cultures they were messengers to and from the celestial world that remained “up there” and invisible.

The swallow  is one example of a small bird that has a ‘big’ folkloric image. It can bring on its wings either good or bad luck. Here are a few examples:

Denmark: Danish tradition notes that the chatty swallow comforted Christ on the cross. The birds sang, “Svale, svale,” which translates to, “Cheer up, Cheer up.”


Germany: One superstition says that if a woman steps on a swallow’s nest or eggs, she will be barren for the rest of her life.


France: French animal lore states that whomever’s shoulder a swallow lands on, misfortune is sure to occur.
America: Farmers' tales warn that if a swallow is harmed a poor harvest will follow.


Posted by folkheart press at 2:17 PM No comments: