Upcoming Folk Art Exhibits Not To Be Missed 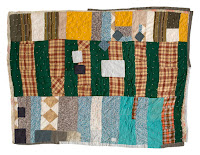 Folk art is most commonly known as the art of the folk. This ‘every day’ art form is rooted in traditions that come from community and culture. It expresses cultural identity by conveying shared community values and aesthetics and includes a range of utilitarian and decorative media, including cloth, wood, paper, clay, metal and more.


To find out more about folk art, consider taking in a folk art exhibit or two this summer. Here are three July and August exhibits:


The Invention of Folk Art
Folk Art and American Modernism
July 18- September 27. American Folk Art Museum, New York, NY
In the early years of the twentieth century, pivotal American modernists began to equate the straightforwardness, abstracted forms, and delight in color of early folk art with the new modernist art they had studied in Europe and were pioneering in America. Folk Art and American Modernism traces the journey of these weathervanes, portraits, decoys, hooked rugs, and other forms of folk art from fishing shacks to the wall of major art museums.