Epona:
The Horse Goddess of Winter

The horse has long had a place in folklore around the world. From the horse gods of the Celtic lands to the pale horse found in Biblical prophecy, the horse has enjoyed a special place in people’s hearts.

Epona was the goddess of horses, donkeys, and mules and was often depicted either riding, usually side-saddle, or taming a wild horse. She was honored by the Gauls who depended heavily upon horses and she was one of the few Celtic deities celebrated by the Romans. The early Romans recognized the horse as a symbol of fertility as well as a messenger from the spirit world.

In fact, the Romans had an annual festival every December to worship her and pay tribute to horses in many ways.  During the Festival of Epona people built shrines and stable altars. They believed the goddess and the horses represented by symbols of fertility and abundance.

It is also important to note that in some afterlife myths, souls ride horseback with Epona to the next world.

Today Epona is still part of a special animal blessing that takes place in Michigan each year. The island resort on Mackinac Island hosts an Epona parade and stable tours. This Epona Festival is fitting as horses are this island’s primary source of transportation.

Posted by folkheart press at 12:30 PM No comments:

Krampus is the yin to Santa's yang. According to German folklore this holiday devil is a dark partner to St. Nicholas (Santa Claus), a mythical creature that brings gifts to good children, over the winter period of Christmas. In most cultures that celebrate this winter holiday, it is believed that children who have not been good throughout the year will not receive gifts from Santa Claus.


In other cultures however, the folklore has an added dimension. In addition to not being rewarded with presents, those children are also punished. Since Santa Claus who is innately good, can't punish the children himself. He leaves that task to the holiday devil, Krampus.


According to folk legends told in countries like Finland and Austria, Krampus whips them with metal chains and then drags them to hell for further punishment.


Often depicted as a demon-creature with cloven hooves, horns and a horrifying tongue, Krampus goes by many names, including: Certa, Schmutzli, Pelznickel and Klaubauf. This dark figure can also be depicted as a smartly dressed gentleman who wears all black or is a human-like hairy creature.

Like St. Nicholas, Krampus can be traced back to pagan folklore. Krampus' mischief is intended to dissuade children from misdeeds and malice.

The Yule Goat is a Scandinavian Christmas symbol.  Although research suggests it is rooted in Germanic and Nordic paganism, its origins may be linked to Thor, the Norse god who was believed to ride across the sky in a chariot drawn by goats.

With 19th century Christianity came the evolution of the goat as an animal that St. Nicholas rode when he delivered gifts to good children. 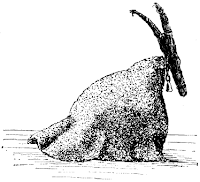 Goats were also used to draw carts during the annual winter wassailing. Wassailing, also known as caroling, took place door-to-door as well as in orchards. The orchard visits included prayers and songs intended to ensure a bountiful harvest in the coming year.

Today’s Yule Goat is most commonly a Christmas ornament  - a folk art - made of straw and decorated with red ribbons.