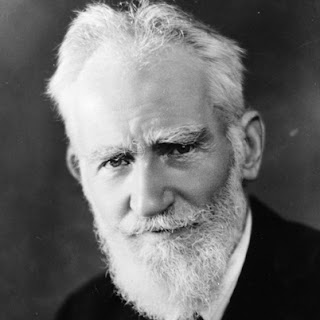 What kind of folk hero rejects the prestigious Noble Prize? Irish playwright George Bernard Shaw did. He is the only person to have won a Noble Prize (1925)  and an Oscar  (1938) for his literature and his work on the film Pygmalion (which is an adaptation of his play).

At his wife's urging this literary master did finally accept the honor . But he insisted the monetary award  be used to translate a fellow playwright’s work from Swedish into English.  An ardent socialist born July 26, 1856 in Dublin he wrote more than 60 plays. Also an essayist  novelist and short story writer. He addressed issues of education, class privilege, marriage, and more.

Shaw was also a member of the Fabian Society, a socialist British organization that peacefully advanced socialism. Members of the Fabian Society members established the London School of Economics and Political Science which is now one of the world’s most selective universities.

This literary folk hero celebrated for his ability to shed light on the concerns of the repressed working class, died November 2, 1950. In his wake he left a remarkable legacy, some of which is captured in these quotes:

A government that robs Peter to pay Paul can always depend on the support of Paul.
We are made wise not by the recollection of our past, but by the responsibility for our future.
Progress is impossible without change, and those who cannot change their minds cannot change anything.
Posted by folkheart press at 1:41 PM