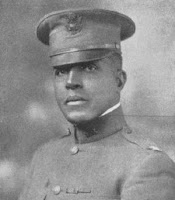 The term “hero” means so many different things. The dictionary definition says a hero is someone who is admired for noble qualities. While, yes, this is often the case, there are so many different types of heroes – including those who aren't noble.  To some, a hero is a literal superhero like Superman, or maybe it’s a mom who serves in the military or a man who saved your life. Heroes can also be people you never met but who had the courage to go against the grain of society's boundaries and make something of themselves.

Colonel Charles Young was the third African American to graduate from West Point, the first black military attaché, the first black to achieve the status of colonel, the first black U.S. national park superintendent, and the highest-ranking black officer in the U.S. Army until 1922 when he passed. The amount of firsts in that brief summary have no doubt made Colonel Young a man worthy of admiration by all.

After his family became freed from slavery, he was also the first black to graduate from an all-white high school in Ohio at 16. He graduated from West Point and his military career progressed until he finally became the Captain in the Cavalry commanding a segregated black company. In 1903 he received orders to take his troops to Sequoia National Park to handle the daunting task of fixing the underdeveloped and hard to visit park that 13 years of previous leaders could not seem to manage. In that summer, Young nearly doubled the mileage of the wagon road that now leads to the famous Moro Rock.
The Ninth Calvary and the Tenth Calvary, with whom Young served, were infamously nicknamed the “BuffaloSoldiers” because of the Indian Wars. The honor and dignity Young brought to every assignment he worked on over 28 years made him a true folk hero, and a figure that many admire. The roads that he pushed so hard to build are now used by tourists in the Sequoia National Park every day and by being a black man who succeeded in a prejudiced society, he’s giving each of us the inspiration and courage to face life’s daily challenges because it’s never impossible to overcome them.


Posted by folkheart press at 2:40 PM